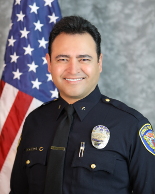 Luis McArthur began his career with the Oxnard Police Department in 1995. He has served as a Field Training Officer, Bicycle Team Member, School Resource Officer, Beat Coordinator in the Colonia neighborhood, Police Activities League Co-Director, Public Information Officer, Lead Sexual Assault Detective and Patrol Sergeant. He is currently a patrol watch commander and has management responsibilities of the North District that includes The Collection at RiverPark.

Commander McArthur has a passion for public service, building an inclusive community and helping young people develop meaningful relationships with police officers to inspire Oxnard’s youth to realize their full potential and prevent juvenile delinquency. He created a competitive and recreational PAL soccer program for children of all ages to have a fun place to play, learn and grow nurtured by a special relationship with youth development professionals and police officers. In 2009, he spoke at a governor’s conference in Mexico on police and youth engagement. He has been a four-time officer of the year nominee. In 2006, he received the Chief’s Award of Excellence and was named outstanding person of the year by the indigenous community of San Martin Peras. In 2010, he received the Community Award from the Fox Soccer Channel and in 2016 he received the Community and Service Award from the Association of Mexican American Educators.

Luis works with many community-based organizations, has professional affiliations and was a former board member of the Coalition for Family Harmony.