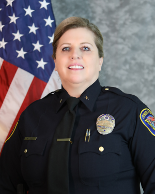 Commander Sharon Giles began her career with the Oxnard Police Department in 1994. During her time in the Field Services Bureau, she served as a Patrol Officer, Field Training Officer, Grant Coordinator, Community Storefront Officer, Bicycle Team member, and served as a Police Explorer Advisor for 10 years. While in the Investigative Services Bureau, she worked as a Detective in the Property Crimes Unit. Sharon was promoted to Senior Officer in 2002 and was assigned as a Detective in the Sexual Assault Unit. In 2010, she was promoted to Sergeant and returned to the Field Services Bureau as a Patrol Sergeant. A year later, she returned to the Investigative Services Bureau as the Sergeant for the, newly created, Sexual Assault and Family Protection Unit (FPU). She served as the supervisor of the FPU and the Interim Investigative Services Commander from March 2017 until her promotion to Commander in December 2017.

Sharon was selected as Officer of the Year in 2004 and Supervisor of the Year in 2013. She graduated from the Sherman Block Supervisory Leadership Institute (SLI). Sharon holds a Bachelor’s Degree in Criminal Justice Management. Sharon is a strong advocate for victims. She spends a great deal of her time working with community organizations, and other law enforcement agencies in finding new and innovative ways to combat abuse against women and children. In 2007, Sharon was presented the “Ellie Liston Crime Victims” award by the Ventura County District Attorney’s Office for her dedication to victims of crime.

Sharon was born and raised in Newfoundland, Canada. She moved to the United States in 1983 and became a citizen in 1995. Sharon resides in the City of Oxnard with her husband, Rod. She is the mother of three adult children, and has five grandchildren.