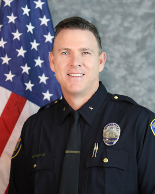 Commander Robin Whitney is a life-long resident of Oxnard and graduated from Oxnard High School. He is bilingual and worked as a bilingual substitute teacher prior to beginning his career in law enforcement.

He began his career with the Oxnard Police Department in 1995, after receiving a Bachelor of Arts Degree in Law and Society from the University of California, Santa Barbara. During his time in the Field Services Bureau, he served as a Southwinds Storefront Officer, Bicycle Officer, Motorcycle Officer, Beat 31 Coordinator, Patrol Sergeant, and Acting Commander. While in the Investigations Bureau, he worked as a Sexual Assault and Child Abuse Detective and Domestic Violence Detective. He has also been assigned to the Administrative Services Bureau as an Internal Audits and Inspections Sergeant and has served as the Department’s Bike Team Sergeant.

Commander Whitney received the the District Attorney’s Crime Victim Assistance Award in 2005. He was nominated for Officer of the Year in 2006. He received the City of Oxnard Employee of the Quarter in 2007.

As a Commander assigned to the Patrol Services Bureau, he oversees the South District, the Neighborhood Policing Team, the Bike Team, and the Body Worn Camera System.