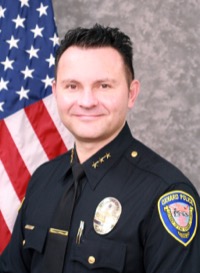 Jason Benites joined the Oxnard Police Department in 1993, after graduating from the University of California at Los Angeles. During his career as a Police Officer he has worked in the Patrol Division, and served as a Field Training Officer, bicycle officer, and was one of three officers who opened a community storefront in Downtown Oxnard.  Upon his promotion to Senior Police Officer, he served as a Beat Coordinator, and was later assigned to detectives until his promotion to Sergeant in March of 2001. Jason returned to the Field Services Bureau as a patrol Sergeant before supervising detectives in the Oxnard Violent Crimes Task Force, a multi-jurisdictional team that partnered with the Federal Bureau of Investigation.

Upon his promotion to Commander in December of 2003, he returned to the Field Services Bureau as one of four watch commanders, and served in the Patrol Support Division. During his time as a commander, he played a role in developing the Neighborhood Policing Strategy, a staffing plan whose purpose was to further strengthen the Oxnard Police Department’s community policing and problem-solving practices.

Jason was promoted to Assistant Chief in November of 2006, and served as the:

He is a 2008 graduate of the California POST Command College.