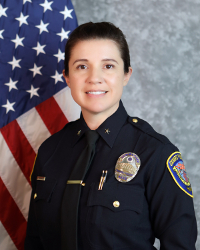 Denise Shadinger began her career with the Oxnard Police Department in 1996 in the Field Services Bureau. She served as a Patrol Officer, Bicycle Team Member, Field Training Officer, K9 Handler, on the Trauma Support Team and as a member of the Department’s Honor Guard. After being promoted to Senior Officer in 2003, she became the K9 Unit Coordinator. In 2007, she was assigned to the Investigative Services Bureau, where she served as a detective in the Narcotics Unit and the Family Protection Unit. She was later assigned to the Ventura County Combined Agency Team, a multi-jurisdictional narcotics task force.

In 2013, Denise was promoted to Sergeant where she served in patrol as Field Supervisor, and in the Administrative Services Bureau, as a Sergeant in the Internal Affairs Unit. She returned to the Field Services Bureau after being promoted to Commander in 2017, where she served as one of four watch commanders. Denise is currently the Patrol Support Division Commander. She oversees the Traffic Unit, Booking Unit, Community Service Officers, Animal Safety Unit, and all special events.

Denise was raised in the city of Oxnard. She holds a Bachelor of Science Degree in Business Management from Kaplan University, and a Master of Arts Degree in Organizational Leadership from Gonzaga University.