As one part of the effort to revitalize Community Policing and Problem-Solving strategies, the Neighborhood Policing Team (“NPT”) was formed in June of 2016.  The vision for the team was based upon a fundamental need to address crime rates, as well as employee input from every level of the organization.

The purpose of the NPT is to serve as a progressive policing unit whose strategies place emphasis on reducing crime, improving traffic safety, strengthening community partnerships, and increasing neighborhood problem-solving. The NPT will place emphasis on crime prevention strategies, such as looking for root causes to problems that contribute to crime and disorder.

The creation of the NPT involved a significant modification to the Department’s beat team structure.  Historically, the City’s eleven (11) policing beats had an assigned Senior Police Officer (a Police Officer III, or “POIII”) who was appointed to serve as a Beat Coordinator.  The Beat Coordinator was someone who served as a liaison to the neighborhoods within a particular beat, as well as to the police officers (Police Officer II or “PO II”) who are assigned to that beat.

Oxnard’s eleven policing beats include ten (10) “traditional” beats and an eleventh beat, the Central Business District (“CBD”), that is staffed during limited time periods (determined based upon fluctuating demands).  These eleven beats are within four (4) policing districts, and previously were referred to specifically by a number.  In 2016, a geographical description (North, South, East, and West) was also associated with each of the four districts, in order to be clearer to the public.

Due to staffing constraints, five (5) of the Beat Coordinators are currently detached from conventional patrol duties, and five (5) Beat Coordinators work seniority-based patrol shifts. These ten officers currently switch every six months, until patrol staffing resources allow for all ten to be detached. A diagram depicting the team structure is below. 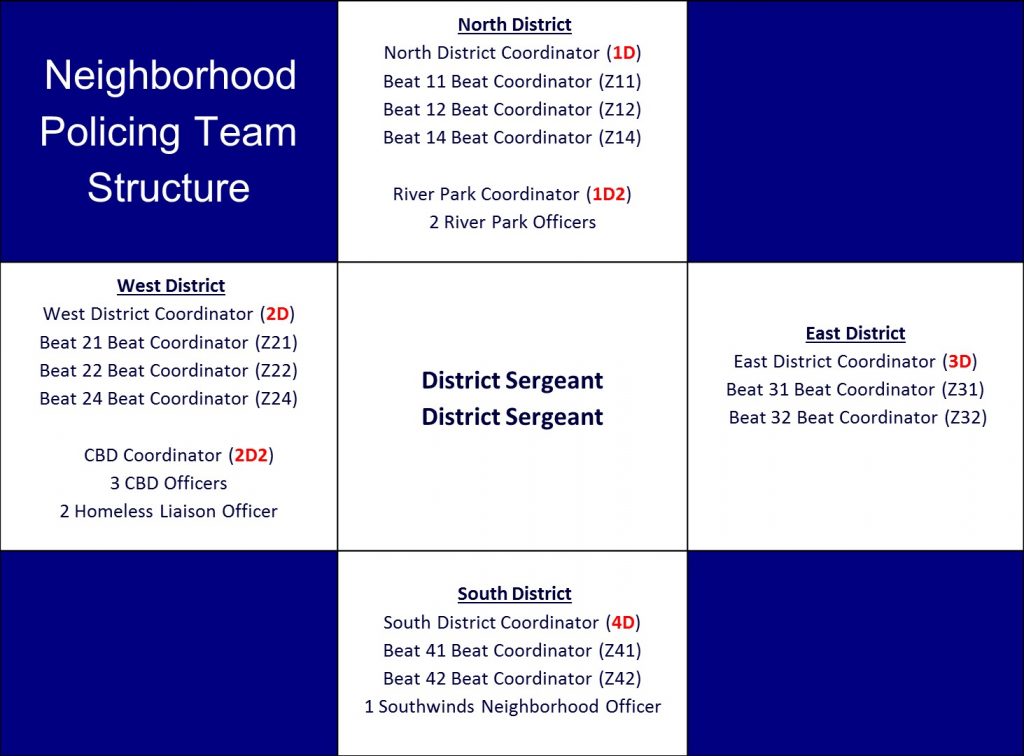 The Neighborhood Policing Sergeants supervise and coordinate citywide problem-solving efforts to address issues related to crime, traffic, and quality of life.  This is accomplished by defining priorities, providing direction to the appropriate district team, their beat teams, and other Department units.  Working with other City departments, outside agencies, community groups, and residents.

The primary function of the District Coordinator is to coordinate problem-solving efforts to address issues related to crime, traffic, and quality of life within their assigned district. This is accomplished by providing instruction and direction to assigned beat coordinators, beat officers, other Department units, other City departments, outside agencies, as well as working with Oxnard residents and community groups.

The primary function of the Beat Coordinator, including patrolling his / her assigned beat, is to coordinate problem-solving efforts to address issues related to crime, traffic, and quality of life. This is accomplished by providing instruction and direction to assigned beat officers, other Department units, other City departments, outside agencies, as well as working with Oxnard residents and community groups.

Together, the Neighborhood Policing Team is able to employ crime reducing strategies such as directed enforcement and special sting or bait operations to catch crimes in progress.  Because the team is detached from normal patrol operations, NPT officers have the ability to focus on crime prevention efforts like Crime Prevention Through Environmental Design (“CPTED”).   CPTED strategies help to reduce problems by mitigating a location’s appeal to criminals to commit their crimes, or engage in nuisance activity.

Since its mid-2016 start, the NPT has already made significant impacts in reducing crime and strengthening community partnerships.  In 2017, the goals for the team are to continue reducing crime, increase operational capabilities (surveillance, search warrant preparation, narcotics investigations, burglary investigations, etc.), promote traffic safety, increase engagement within the community, and lead neighborhood policing and problem solving efforts.  The NPT will engage in a number of crime prevention efforts.

During 2017 the NPT will also continue with its efforts to conduct crime prevention efforts (a minimum of one outreach effort per district, each month), as well as provide CPTED assessments to both residents and businesses upon request.  Most notably, the NPT is continuing into 2017 to make an ambitious effort to introduce its officers to over 3,800 Oxnard businesses.